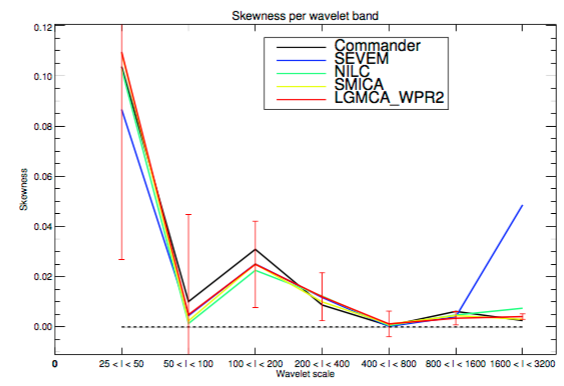 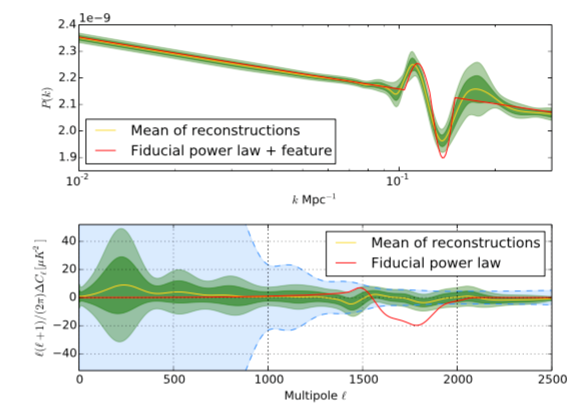 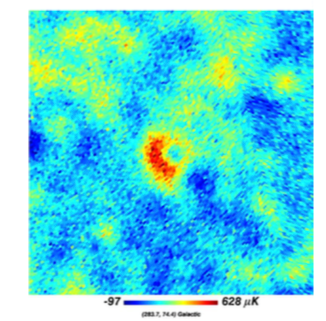 Missions such as WMAP or Planck measure full-sky fluctuations of the cosmic microwave background and foregrounds, among which bright compact source emissions cover a significant fraction of the sky. To accurately estimate the diffuse components, the point-source emissions need to be separated from the data, which requires a dedicated processing. We propose a new technique to estimate the flux of the brightest point sources using a morphological separation approach: point sources with known support and shape are separated from diffuse emissions that are assumed to be sparse in the spherical harmonic domain. This approach is compared on both WMAP simulations and data with the standard local chi2 minimization, modelling the background as a low-order polynomial. The proposed approach generally leads to 1) lower biases in flux recovery, 2) an improved root mean-square error of up to 35% and 3) more robustness to background fluctuations at the scale of the source. The WMAP 9-year point-source-subtracted maps are available online. 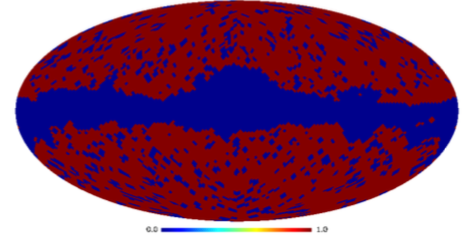 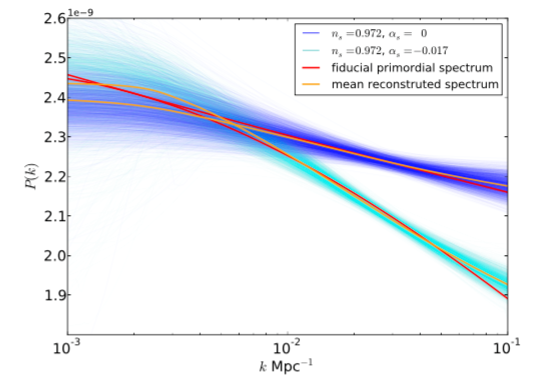 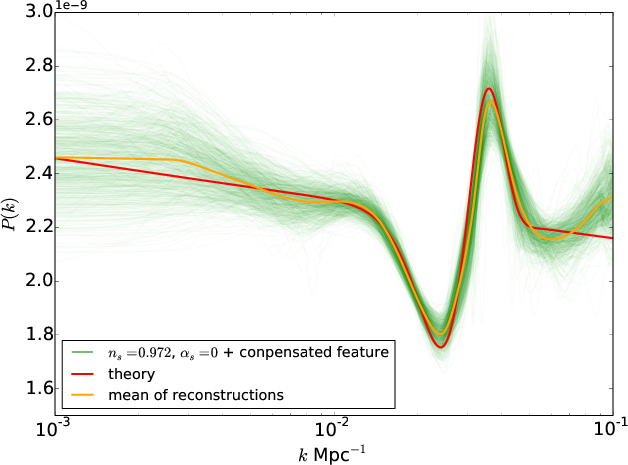 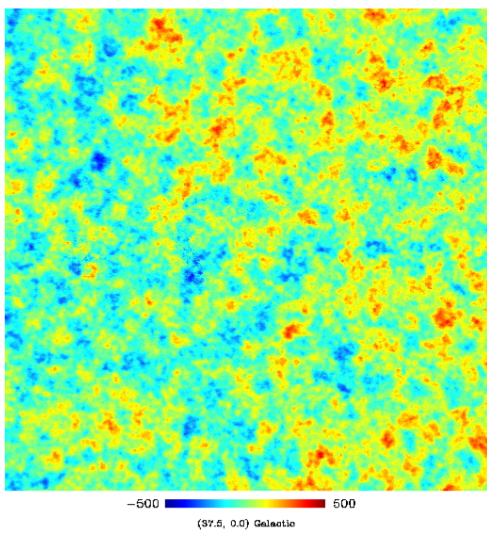 We present a novel estimate of the cosmological microwave background (CMB) map by combining the two latest full-sky microwave surveys: WMAP nine-year and Planck PR1. The joint processing benefits from a recently introduced component separation method coined "local-generalized morphological component analysis'' (LGMCA) based on the sparse distribution of the foregrounds in the wavelet domain. The proposed estimation procedure takes advantage of the IRIS 100 micron as an extra observation on the galactic center for enhanced dust removal. We show that this new CMB map presents several interesting aspects: i) it is a full sky map without using any inpainting or interpolating method, ii) foreground contamination is very low, iii) the Galactic center is very clean, with especially low dust contamination as measured by the cross-correlation between the estimated CMB map and the IRIS 100 micron map, and iv) it is free of thermal SZ contamination.

The LGMCA method has been used to reconstruct the Cosmic Microwave Background (CMB) image from WMAP 9 year and Planck-PR1 data. Based on the sparse modeling of signals - a framework recently developed in applied mathematics - the proposed component separation method is well-suited for the extraction of foreground emissions. A joint WMAP9 year and Planck PR1 CMB has been reconstructed for the first time and produce a very high quality CMB map, especially on the galactic center where it is the most difficult due to the strong foreground emissions of our Galaxy. We compare the LGMCA results with other CMB Planck PR1 maps: 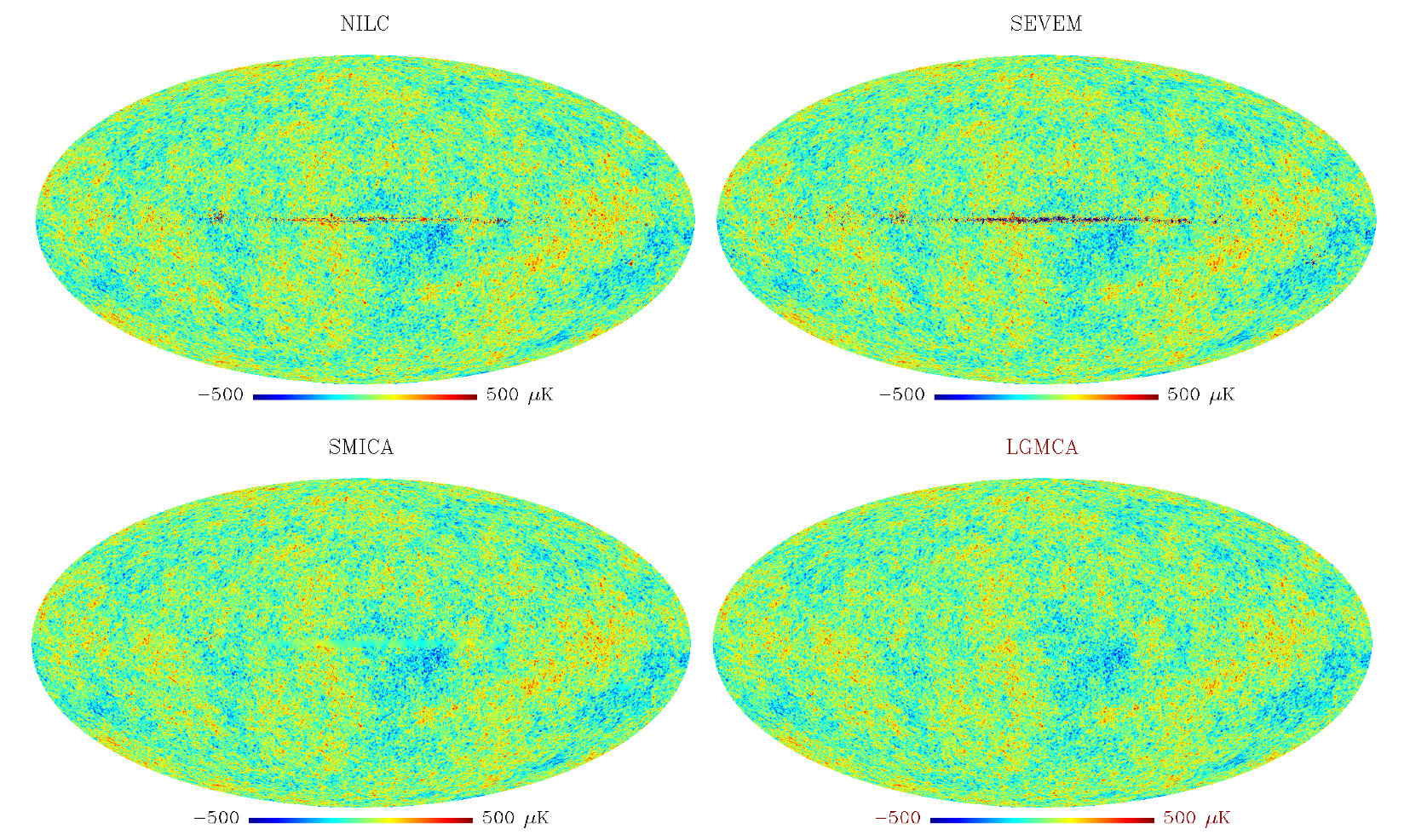 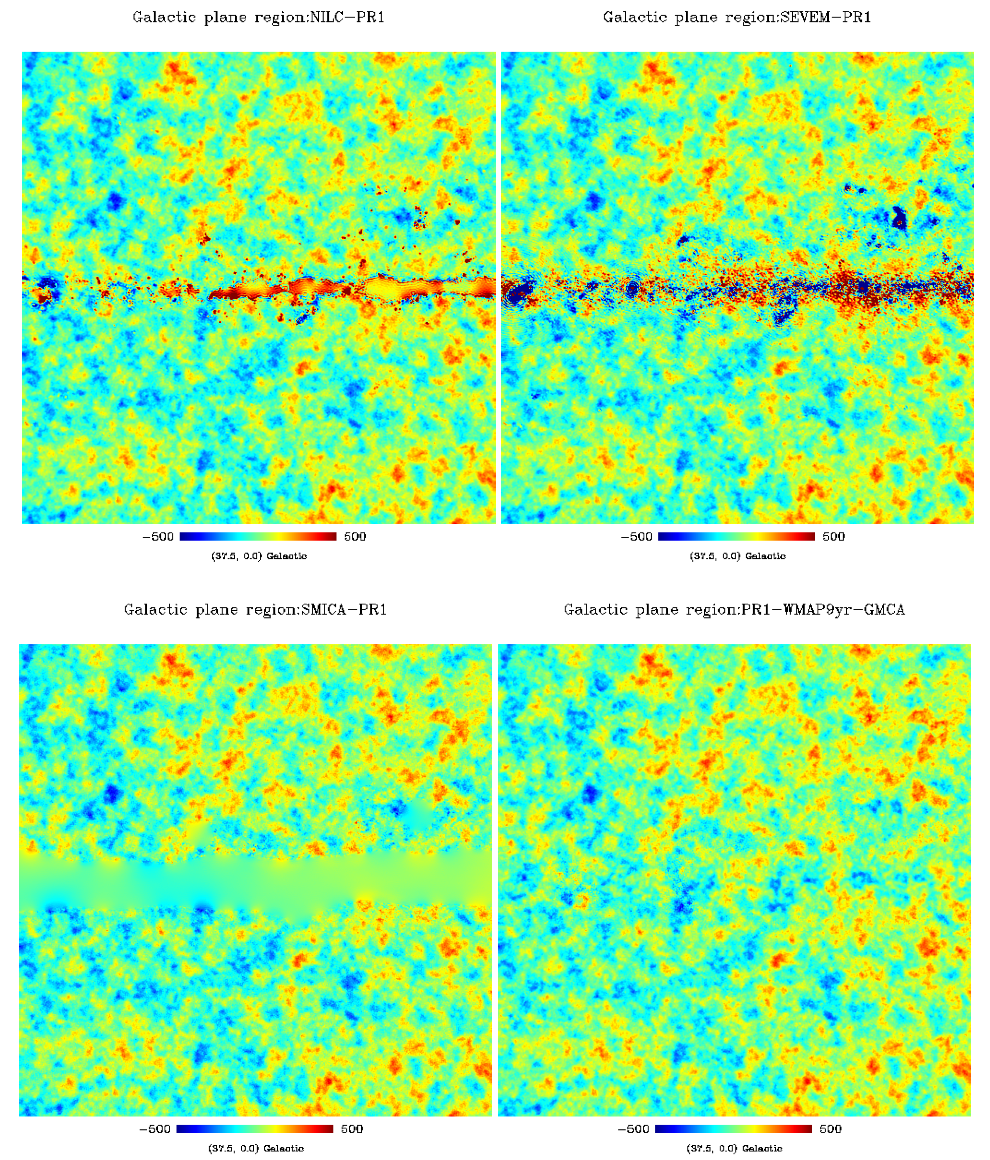 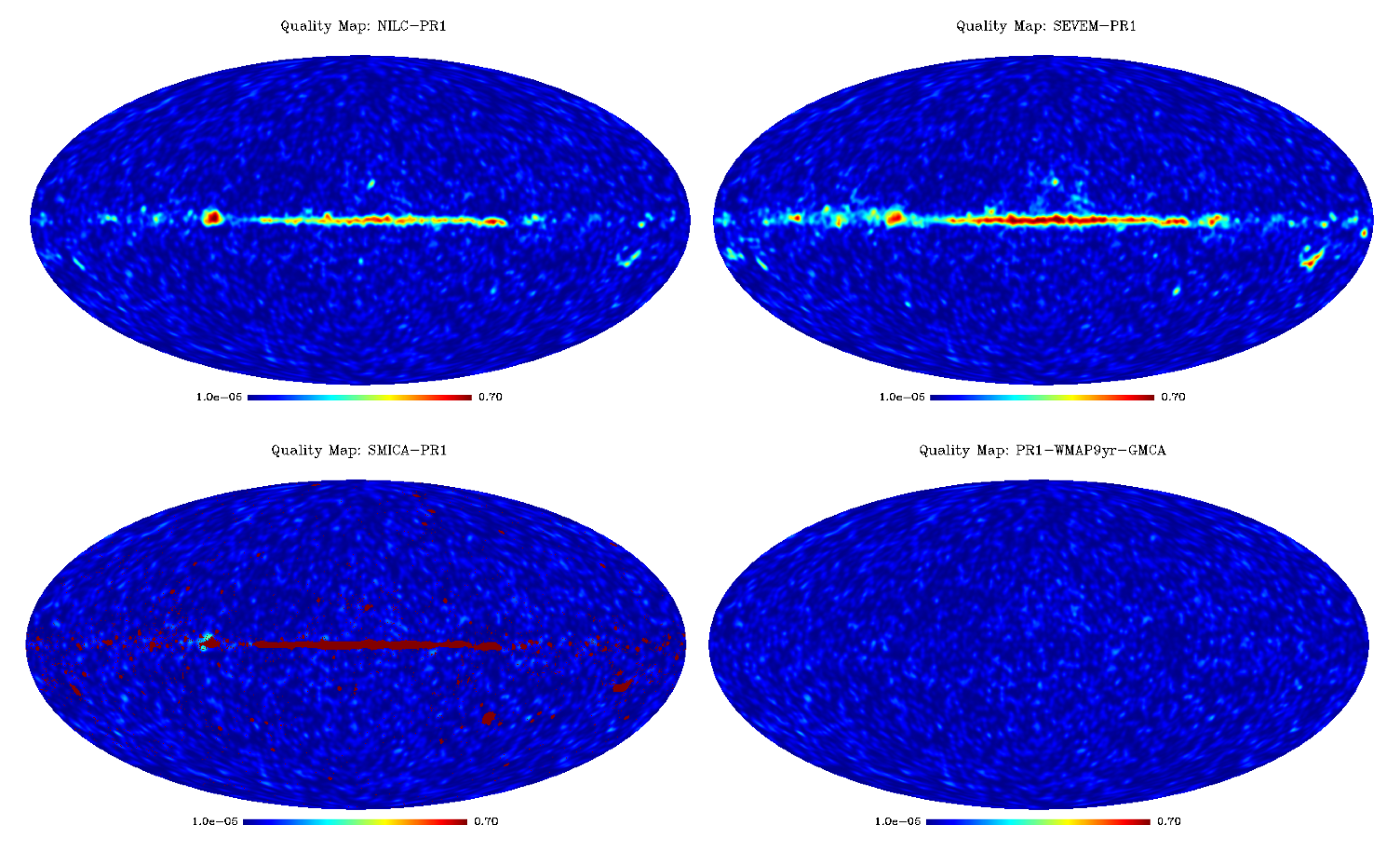 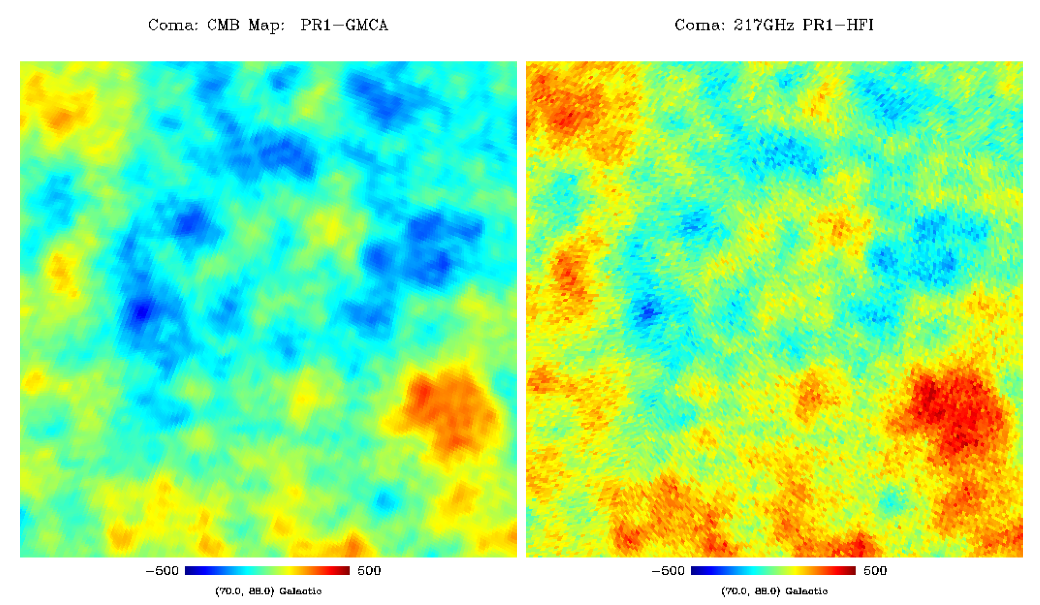 The maps below shows the differences between HFI-217GHz and CMB maps, respectively PR1 NILC, SEVEM, SMICA and WPR1 LGMCA. As the SZ vanishes at 217GHz, the presence of residuals of tSZ in the difference reveals a tSZ contamination in the estimated CMB map. 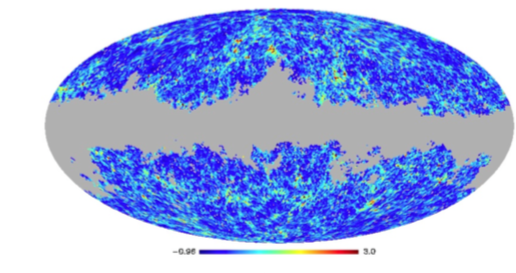 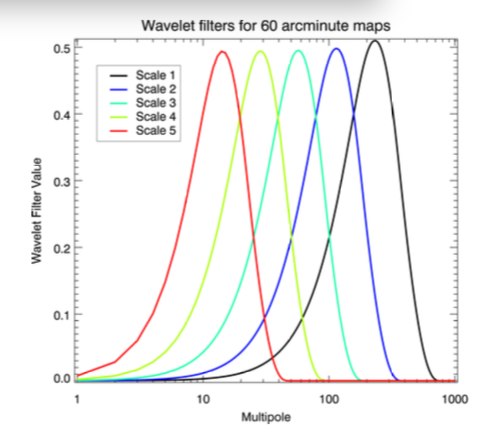 Recovering the cosmic microwave background (CMB) from WMAP data requires that Galactic foreground emissions are accurately separated out. Most component separation techniques rely on second-order statistics such as internal linear combination (ILC) techniques. We present a new WMAP nine-year CMB map with a resolution of 15 arcmin, which is reconstructed using a recently introduced sparse-component separation technique, called local generalized morphological component analysis (LGMCA). This focuses on the sparsity of the components to be retrieved in the wavelet domain. We show that although they are derived from a radically different separation criterion (i.e. sparsity), the LGMCA-WMAP 9 map and its power spectrum are fully consistent with their more recent estimates from WMAP 9. 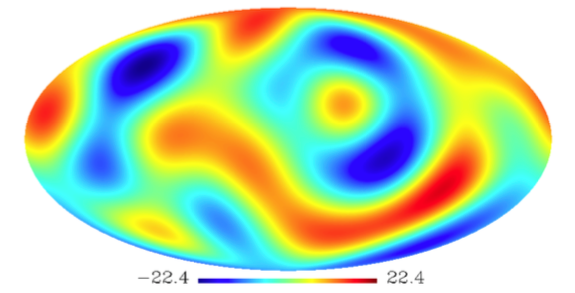 There is currently a debate over the existence of claimed statistical anomalies in the cosmic microwave background (CMB), recently confirmed in Planck data. Recent work has focussed on methods for measuring statistical significance, on masks and on secondary anisotropies as potential causes of the anomalies. We investigate simultaneously the method for accounting for masked regions and the foreground integrated Sachs-Wolfe (ISW) signal. We search for trends in different years of WMAP CMB data with different mask treatments. We reconstruct the ISW field due to the 2 Micron All-Sky Survey (2MASS) and the NRAO VLA Sky Survey (NVSS) up to l=5, and we focus on the Axis of Evil (AoE) statistic and even/odd mirror parity, both of which search for preferred axes in the Universe. We find that removing the ISW reduces the significance of these anomalies in WMAP data, though this does not exclude the possibility of exotic physics. 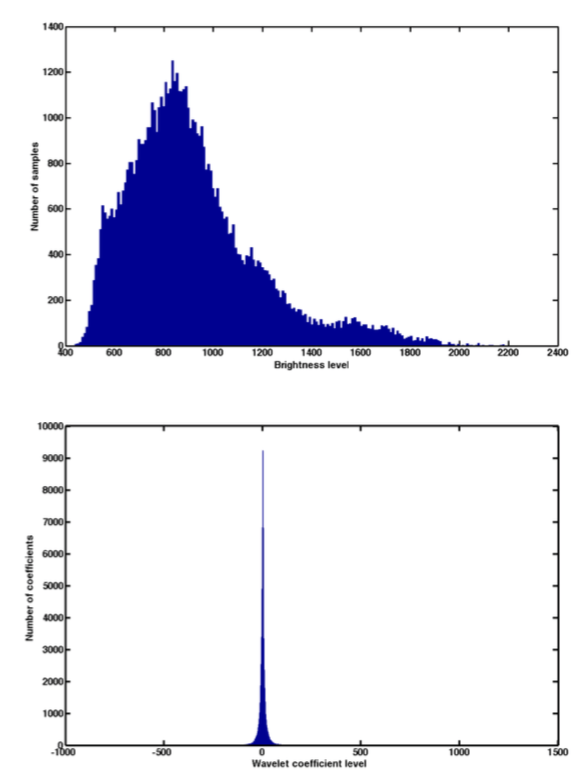