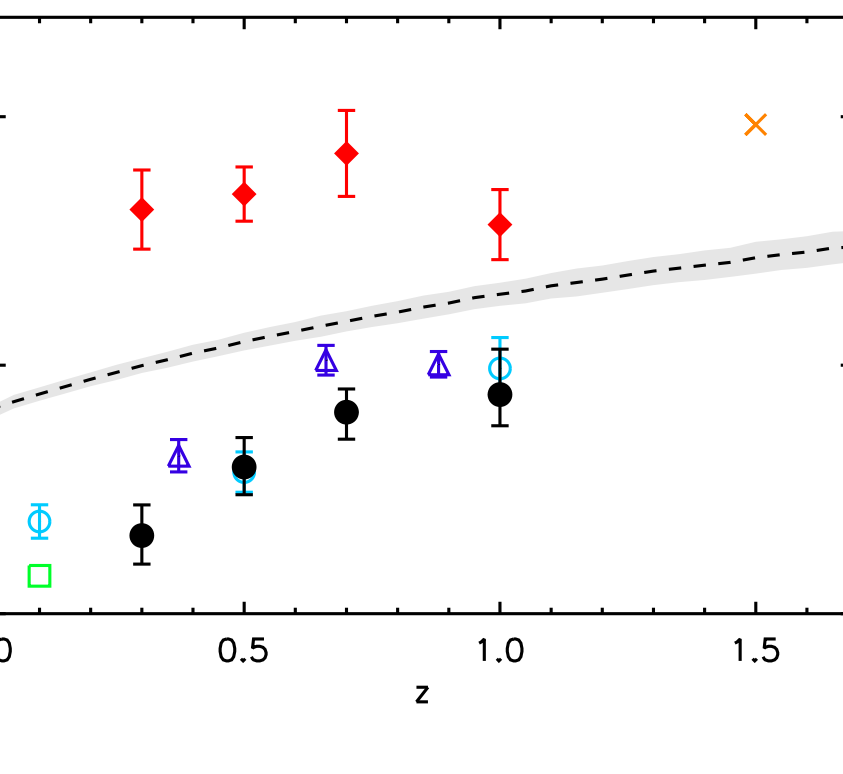 We present a detailed investigation of the changing relationship between galaxies and the dark matter haloes they inhabit from z~1.2 to the present day. We do this by comparing precise galaxy clustering measurements over 133 deg2 of the "Wide" component of the CFHT Legacy Survey (CFHTLS) with predictions of an analytic HOD model where the number of galaxies in each halo depends only on the halo mass. Starting from a parent catalogue of ~ 3x10^6 galaxies at i'_AB < 22.5 we use accurate photometric redshifts calibrated using ~ 10^4 spectroscopic redshifts to create a series of type-selected volume-limited samples covering 0.2 < z < 1.2. Our principal result, based on clustering measurements in these samples, is a robust determination of the luminosity-to-halo mass ratio and its dependence on redshift and galaxy type. For the full sample, this reaches a peak at low redshifts of Mh,peak = 4.5x10^11 h^-1 M_sun and moves towards higher halo masses at higher redshifts. For redder galaxies the peak is at higher halo masses and does not evolve significantly over the entire redshift range of our survey. We also consider the evolution of bias, average halo mass and the fraction of satellites as a function of redshift and luminosity. Our observed growth of a factor of ~ 2 in satellite fraction between z~1 and z~0 is testament to the limited role that galaxy merging plays in galaxy evolution for ~ 10^12 h^-1 M_sun mass haloes at z<1. Qualitatively, our observations are consistent with a picture in which red galaxies in massive haloes have already accumulated most of their stellar mass by z~1 and subsequently undergo little evolution until the present day. The observed movement of the peak location for the full galaxy population is consistent with the bulk of star-formation activity migrating from higher mass haloes at high redshifts to lower mass haloes at lower redshifts.

We measured the galaxy spatial correlation function in multi-band optical data over 133 square degree in the CFHTLS-Wide survey, from z=0.2 to 1.2 (Coupon, Kilbinger et al., A&A, 2012). Comparing these observations to a semi-analytical model of the matter distribution in the Universe, including a prescription how galaxies populate halos, a so-called halo occupation distribution (HOD) model, we determine the evolution of the luminosity-to-mass (L/M) ratios for stellar-mass selected galaxy samples. A maximum L/M is reached at halo masses of 6.3 × 1011 at low redshift. This mass increases with redshift, indicating “anti-hierarchical” evolution or “down-sizing”, where galaxies formed more efficiently in larger halos in the past.