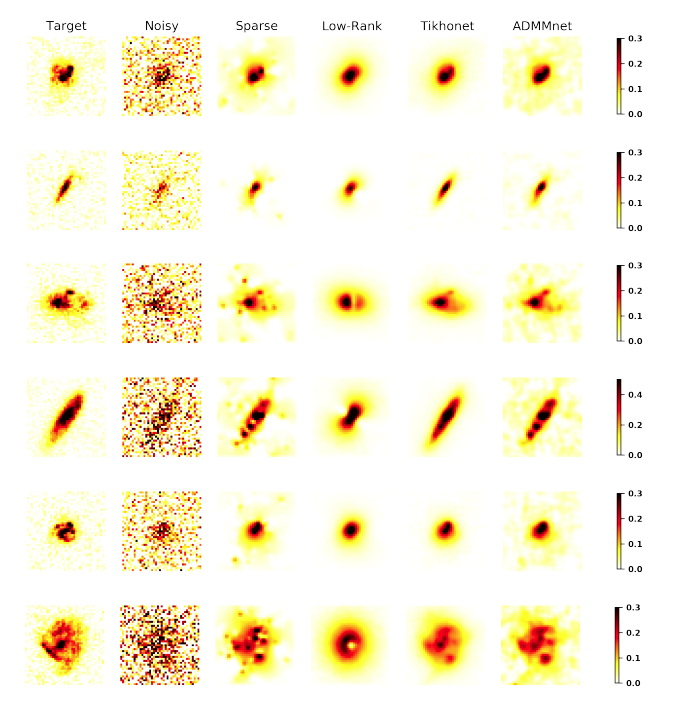 The deconvolution of large survey images with millions of galaxies requires developing a new generation of methods that can take a space-variant point spread function into account. These methods have also to be accurate and fast. We investigate how deep learning might be used to perform this task. We employed a U-net deep neural network architecture to learn parameters that were adapted for galaxy image processing in a supervised setting and studied two deconvolution strategies. The first approach is a post-processing of a mere Tikhonov deconvolution with closed-form solution, and the second approach is an iterative deconvolution framework based on the alternating direction method of multipliers (ADMM). Our numerical results based on GREAT3 simulations with realistic galaxy images and point spread functions show that our two approaches outperform standard techniques that are based on convex optimization, whether assessed in galaxy image reconstruction or shape recovery. The approach based on a Tikhonov deconvolution leads to the most accurate results, except for ellipticity errors at high signal-to-noise ratio. The ADMM approach performs slightly better in this case. Considering that the Tikhonov approach is also more computation-time efficient in processing a large number of galaxies, we recommend this approach in this scenario.

In the spirit of reproducible research, the codes will be made freely available on the CosmoStat website (http://www.cosmostat.org). The testing datasets will also be provided to repeat the experiments performed in this paper.