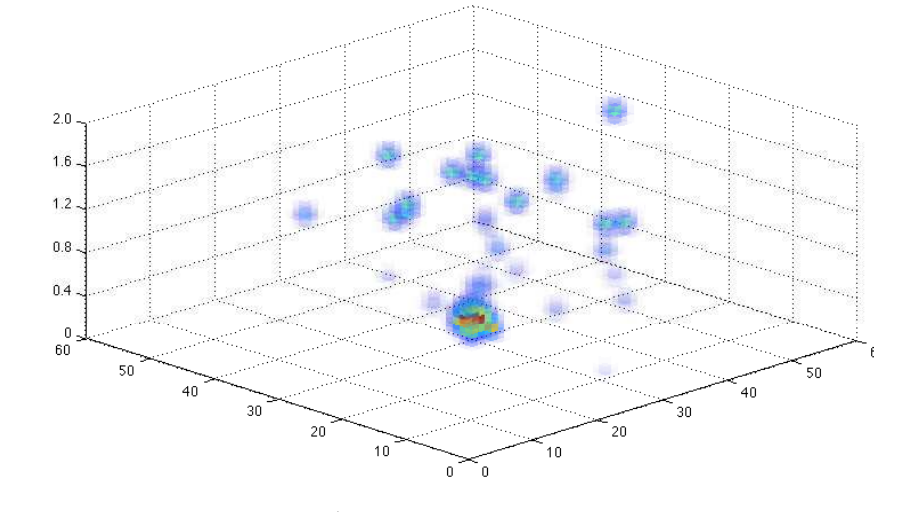 (Abridged) Weak gravitational lensing is an ideal probe of the dark universe. In recent years, several linear methods have been developed to reconstruct the density distribution in the Universe in three dimensions, making use of photometric redshift information to determine the radial distribution of lensed sources. In this paper, we aim to address three key issues seen in these methods; namely, the bias in the redshifts of detected objects, the line of sight smearing seen in reconstructions, and the damping of the amplitude of the reconstruction relative to the underlying density. We consider the problem under the framework of compressed sensing (CS). Under the assumption that the data are sparse in an appropriate dictionary, we construct a robust estimator and employ state-of-the-art convex optimisation methods to reconstruct the density contrast. For simplicity in implementation, and as a proof of concept of our method, we reduce the problem to one-dimension, considering the reconstruction along each line of sight independently. Despite the loss of information this implies, we demonstrate that our method is able to accurately reproduce cluster haloes up to a redshift of z=1, deeper than state-of-the-art linear methods. We directly compare our method with these linear methods, and demonstrate minimal radial smearing and redshift bias in our reconstructions, as well as a reduced damping of the reconstruction amplitude as compared to the linear methods. In addition, the CS framework allows us to consider an underdetermined inverse problem, thereby allowing us to reconstruct the density contrast at finer resolution than the input data.