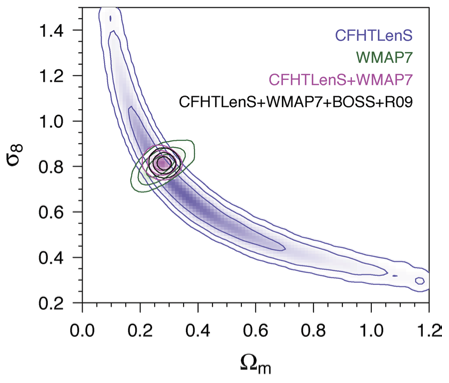 CFHTLenS: Constraining the Dark Universe with weak lensing from the CFHT Lensing Survey

We have taken part in the largest galaxy survey to measure the distribution of dark matter in the Universe using the gravitational lensing effect. More than 4.2 million galaxies have been observed for over 500 nights at the Canada-France Hawaii Telescope (CFHT) with the camera MegaCam, built at the CEA. Measuring the weak-lensing distortions from these galaxies, we determined the fraction of dark matter and dark energy up to 8.8 billion years in the past. Together with other experiments the results showed that the Universe is undergoing a phase of accelerated expansion, due to a yet unknown “dark-energy” component, that makes up around 70% of the cosmos. Those measurements were also use to test the laws of gravity on large scales. Some models of deviations from Einstein’s theory of general relativity could be ruled out by the data, reducing possible alternatives for the cause of the accelerated expansion of the Universe.