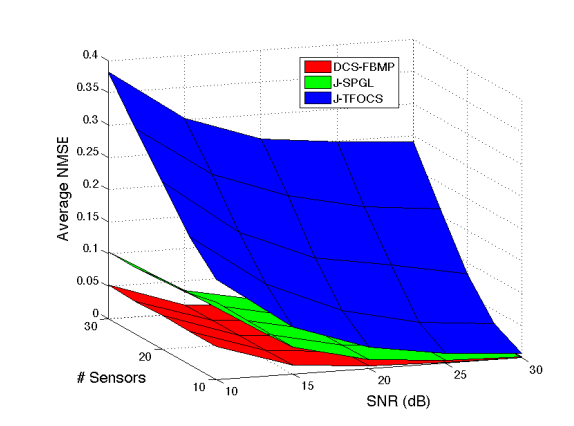 Wireless networks comprised of low-cost sensory devices have been increasingly used in surveillance both at the civilian and military levels. Limited power, processing, and bandwidth resources is a major issue for abandoned sensors, which should be addressed to increase the network's performance and lifetime. In this work, the framework of compressive sensing is exploited, which allows accurate recovery of signals being sparse in some basis using only a small number of random incoherent projections. In particular, a recently introduced Bayesian Matching Pursuit method is modified in a decentralized way to reconstruct a multi-signal ensemble acquired by the nodes of a wireless sensor network, by exploiting a joint sparsity structure among the signals of the ensemble. The proposed approach requires a minimal amount of data transmissions among the sensors and a central node thus preserving the sensors' limited resources. At the same time, it achieves a reconstruction performance comparable to other distributed compressive sensing methods, which require the communication of a whole set of measurements to the central node.