Our beautiful radio-interferometry reconstructed image, using a method based on Compressed Sensing Theory, has been highlighted by the Square Kilometre Array (SKA) project:.

On the day of the Brexit outcome, so disastrous for Europe and the UK, there is at least good news for the cosmological community: CFIS, the Canada-France Imaging Survey, has been accepted! This survey consists of two parts. The WIQD​(Wide ­ Image Quality ­ Deep) part will cover 5,000 deg2 of the Northern sky, observed in the r-band with the CFHT (Canada-France Hawai’i telescope). The u-band will cover 10,000 deg2 to a lower depth, and is part of LUAU (Legacy for the U­-band All­-sky Universe). 271 nights are granted, observations will start in 8 months from now.

CFIS will allow us to study properties of dark-matter structures, including filaments between galaxy clusters and groups, stripping of dark-matter halos of satellite galaxies in clusters, and the shapes of dark-matter halos. In addition, the laws of gravity on large scales will be tested, and modifications to Einstein’s theory of general relativity will be looked for. CFIS will observe a very large number of distant, high-redshift galaxies, and will use techniques of galaxy clustering and weak gravitational lensing to achieve its goals.

In addition, CFIS will create synergie with other ongoing and planned surveys: CFIS will provide ground-based optical data for Euclid photometric-redshifts. It will produce a very useful imaging data set for target selection for spectroscopic surveys such as DESI, WEAVE, and MSE. It will further provide optical data of galaxy clusters that will enhance the science outcome of the X-ray mission eRosita.

Slides for weak-lensing (no figure to reduce file size):
Day 1 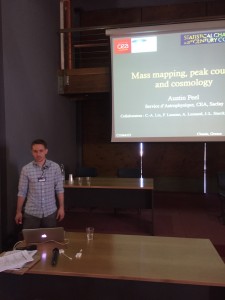 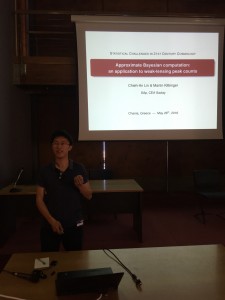 We are glad to announce the release of the outreach video “Dessine ta thèse” (means “Draw your thesis” in French) on youtube. This episodes focuses on gravitational lensing and involves the participation of the CosmoStat member Chieh-An Lin.

Both French and English subtitles are available!

Cécile Chenot, who is pursuing a PhD at the LCS in signal processing, has been selected to participate to the prestigious 66th Lindau Nobel laureate meeting this summer.

European Space Agency has validated the design of the Euclid satellite which allows its construction. This telescope, probing the dark Universe, will be launched in 2020!