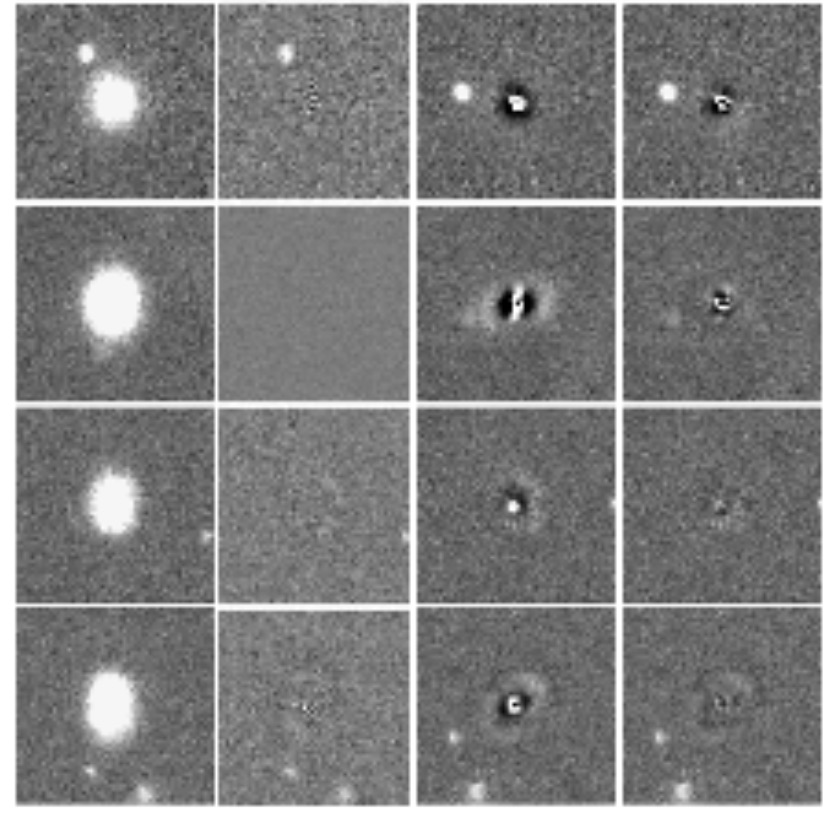 We present an algorithm using principal component analysis (PCA) to subtract galaxies from imaging data and also two algorithms to find strong, galaxy-scale gravitational lenses in the resulting residual image. The combined method is optimised to find full or partial Einstein rings. Starting from a pre-selection of potential massive galaxies, we first perform a PCA to build a set of basis vectors. The galaxy images are reconstructed using the PCA basis and subtracted from the data. We then filter the residual image with two different methods. The first uses a curvelet (curved wavelets) filter of the residual images to enhance any curved/ring feature. The resulting image is transformed in polar coordinates, centred on the lens galaxy. In these coordinates, a ring is turned into a line, allowing us to detect very faint rings by taking advantage of the integrated signal-to-noise in the ring (a line in polar coordinates). The second way of analysing the PCA-subtracted images identifies structures in the residual images and assesses whether they are lensed images according to their orientation, multiplicity, and elongation. We applied the two methods to a sample of simulated Einstein rings as they would be observed with the ESA Euclid satellite in the VIS band. The polar coordinate transform allowed us to reach a completeness of 90% for a purity of 86%, as soon as the signal-to-noise integrated in the ring was higher than 30 and almost independent of the size of the Einstein ring. Finally, we show with real data that our PCA-based galaxy subtraction scheme performs better than traditional subtraction based on model fitting to the data. Our algorithm can be developed and improved further using machine learning and dictionary learning methods, which would extend the capabilities of the method to more complex and diverse galaxy shapes.