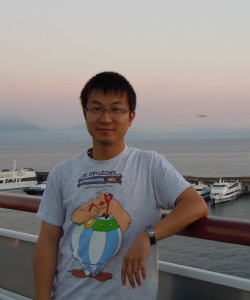 I'm working on the hyperspectral interferometric signal reconstruction. One of the most promising methods is to utilize the concept "Compressed Sensing" to recover a sparse signal, not only in two spatial dimensions but also in time or wavelength dimension.

My research interests mainly include:

I received a Bachelor's Degree in Electrical and Electronic Engineering from Xidian University in 2011.

From 2010 to 2014, due to the program "3+3" between China and France, I studied in Télécom Bretagne and obtained a Master of Engineering degree with a major in Information Processing Systems. During 2013 - 2014, I obtained a double degree: Master of Research on Image, which was awarded by Télécom Bretagne, Rennes 1 and Supélec, according to the academic program "SISEA".

During my studies, I had an opportunity to participate in "Programme First" of the edition 2012 organized by Fondation Télécom. In addition, I worked as an intern in Alcatel-Lucent France and LaTIM - INSERM U1101.